I probably wasn’t the only one surprised to see EA announce an online racing game back in 2001. Motor City Online was an interesting twist on the MMO genre. The early 2000s were boom times for MMOs, especially MMORPGs like Ultima Online, Everquest and Asheron’s Call. However, genres other than RPGs were relatively uncharted territory, and being a fan of the Need for Speed series, I signed up for the beta.

The game was broken down into two modes: a web-like menu system where you’d spend most of your time, and the action piece of the game, the racetrack. 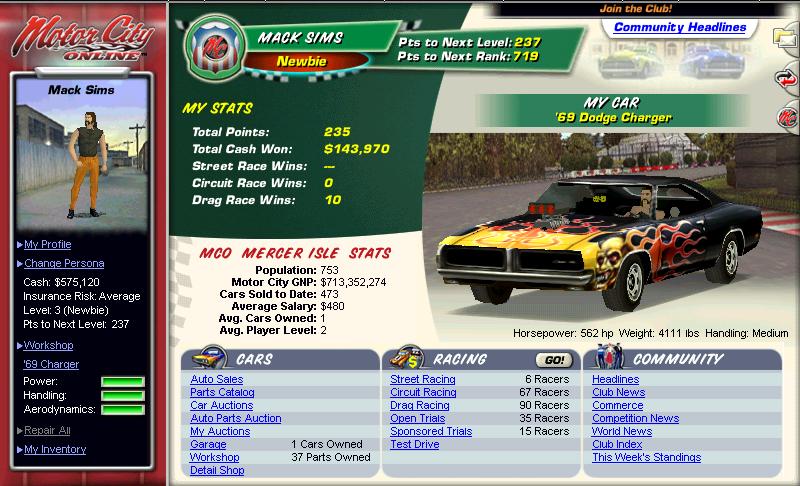 Most of your time in MCO was spent in these menus where you’d access all of the simulation management functions. This included things like customizing your character, but most of what you’d do was buy and sell cars, customize or repair your cars, or find and enter races. The system was very detailed, allowing you to auction off things as specific as a Dodge Charger body or a Ford Mustang 302 engine. Auctions were exciting and pretty well done, probably not exceeded until systems like the one Blizzard introduced for World of Warcraft.

If you’ve ever used eBay Motors, you’re already familiar with how the buying and selling worked. You could buy new or used parts from other players as well as from a catalog of stock parts. This included functional upgrades, new cars, or neat window dressing like custom paint jobs, fuzzy dice, and a custom license plate. 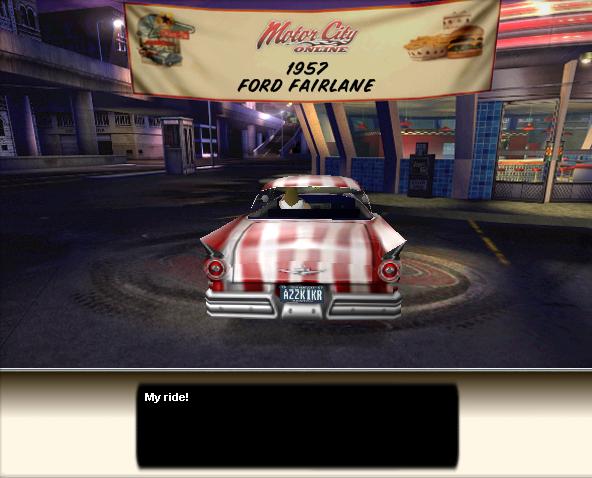 Every player (at least in the beta) started with Ford Fairlane. Not being a car person, I have no idea whether this was actually a good car to race, but in MCO’s game mechanics, it was equivalent to a wooden staff you might start with in an RPG. In order to earn money for fancier cars or car upgrades, you had to participate in “PVP”, or in this game, win races against human opponents. It had a steep learning curve, and you were pretty much limited to going against other new players at first, as more expensive cars had huge advantages over cheaper ones. In fact, at least with the beta, the Nova pretty much destroyed every other car, so there might have been some balance issues.

I managed to win a few races and upgrade to a Chevelle which I had slightly better luck with. This was the pace of the game though: find a racing mode and opponents that were evenly matched; win a bunch of races; upgrade your car; rinse and repeat. There were definitely some cars that fared better in different modes, but finding the right combination of factors wasn’t that interesting to me. The most fun I had was putting a bunch of random parts into a car just to see how it would effect its driving. As I recall, you could pretty much replace anything: the engine, the frame, the wheels, etc. I had frankenstein’d this car to have a 1958 Cadillac V8 instead of the stock Chevelle engine, mostly because the sound it made was really nice. Those kind of touches were really fun to discover, even if they didn’t lead to much gameplay advantage. 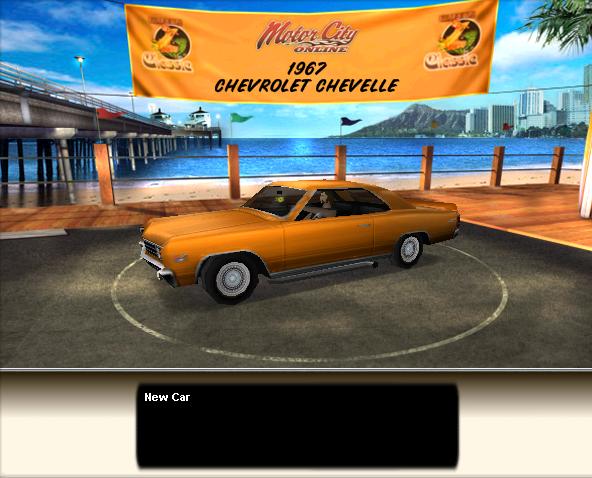 The biggest downside of the game in beta was the actual racing mode. I’m sure they improved the game before it went public, but even compared to NFS titles that were out at the time, the graphics were bland and unimpressive. I think there were basically two POVs: third person slightly behind the car and first person inside the car. While MMOs aren’t known for exceptional graphics, I think that’s where being a racing MMO vs an MMORPG made this a bigger issue. The controls weren’t great either, and at many times lag seemed to be a bigger factor than either player’s abilities. 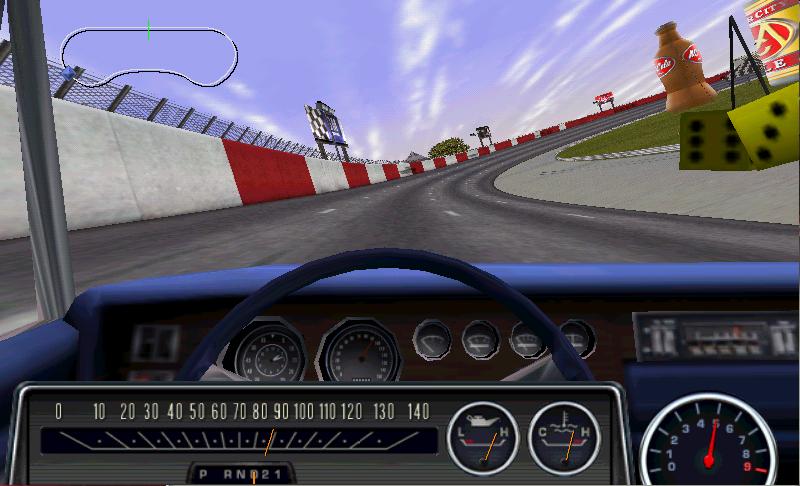 Another annoying aspect was that even though you could customize your avatar appearance, for most racing modes, your driver is in a suit with a helmet, making all drivers identical. 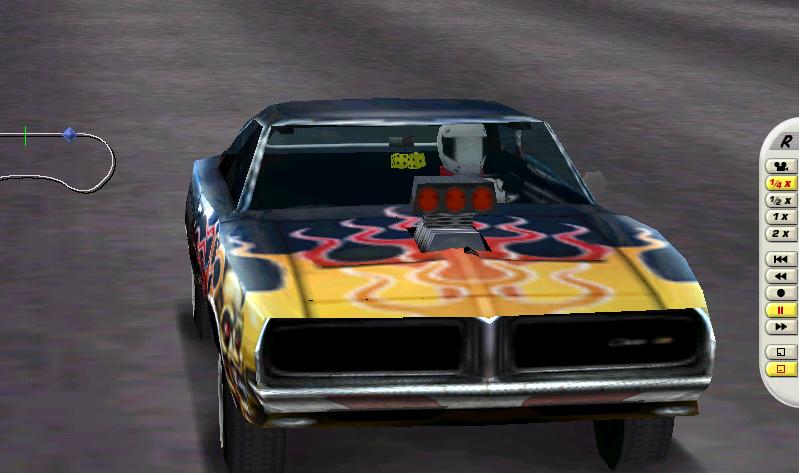 Looking back, I’m glad I didn’t end up getting a subscription. I had some fun playing the game, and an online racing simulator was a pretty novel concept, so I’m glad EA tried it. EA did not give MCO a long shelf life, and being an online only game, once the servers went offline so did all of your cars. I think I got more mileage playing Gran Turismo 2, which had better graphics and gameplay, but pretty basic customization. I’ve missed that the most from what MCO had to offer, and it’s a shame that no games since have captured the parts that made Motor City Online special.