As mentioned in part 1 I decided to start removing my dependencies on the  company due to my increasing sense that their platform was becoming hostile to my usage patterns. The biggest, fanciest, and most expensive piece of hardware came in the form of my 2013 Mac Pro.

When the new Mac Pro was announced, my enthusiasm for Macs was already in decline. I was a little disappointed that the classic cheese-grater look was going away, but it made sense given the tendency that Macs were getting smaller, more streamlined designs. The hardware was a significant upgrade compared to my 2008 Dual Quad Core Mac Pro. That machine, in retrospect, was one of the most reliable computers I ever owned. Its hardware expandability allowed it to stay useful and performant 6 years after its manufacture date. This new, ashtray Mac was more akin to the retina Macbook Pro, there were little or no options when it came to upgrading the machine. OWC and some other shops eventually offered upgraded components, but it was certainly not going to be with any components that were readily available. The only way to add SATA drives would be through expensive Thunderbolt drive enclosures. The optical drive would have to be a USB Superdrive. For HDMI video capture, I’d either need an expensive Thunderbolt capture device or an expensive Thunderbolt PCIe enclosure for my current capture card. There’s a theme to all of this, but I’ll revisit that shortly.

I eventually took the $6000 [≈ 2007 CEO hourly pay] plunge and got a model that made tradeoffs I could live with. The benefits to the new design were instantly recognizable. The machine is almost silent. I thought the 2008 Mac Pro was quiet for such a powerful machine, but sitting next to the 2013 Mac Pro, there was a noticeable difference. The 2013 Mac Pro is also very small in comparison, I have shoeboxes that are larger. That might not be a selling point for everyone, but moving across the country has taught me to appreciate the cubic centimeters of boxes. Everything that Apple had promised to deliver was proven out with this impressive, fancy new machine.

Recall that previously I mentioned all upgrades would largely need to be based on the 6 Thunderbolt ports the Mac Pro has. I started with adding an Elite Pro Dual to have some fast temporary space off the main SSD for video files. The two SATA drives in it were previously inside the 2008 Mac Pro, so those were already on hand. I also added a very nice Aja ioXT HDMI capture device to replace the Blackmagic PCIe card I had been using. I also connected an older USB 3 enclosure that had been hooked up to the 2008 Mac pro to one of the Mac Pro’s USB 3 ports. After some time and a lot of money, I essentially had reinvented my old setup. But at what cost?

Certainly there was a financial cost, as pricing for Thunderbolt devices seem to be “take the cost of a USB or Firewire device and then multiply it by 1.5.” There was also a very noticeable desk space cost. While the 2013 Mac Pro took up much less space than the 2008 model by itself, I had the 2008 tower underneath my desk. Now I had to make new space on my desk and around it for all of these peripherals that replaced the internal drives and PCIe capture card. On top of that, I had to dig out an old power strip because of my new set of required AC adapters. There was also the Thunderbolt Kudzu growing from beneath my desk, spreading to every corner. One day while cleaning up, along with the occasional unmounting of a drive and a device getting knocked out of its surge protector, it dawned on me:

Sure, a laptop with more powerful hardware, but also a laptop without a screen, battery, or mobility. For years, the solution to using a Macbook Pro for professional work was a collection of cables and chords to connect all matter of periphery to expand it. It’s not that I don’t use laptops or begrudge their usefulness, but this machine seemed to come with all of the drawbacks of a laptop with none of the benefits. 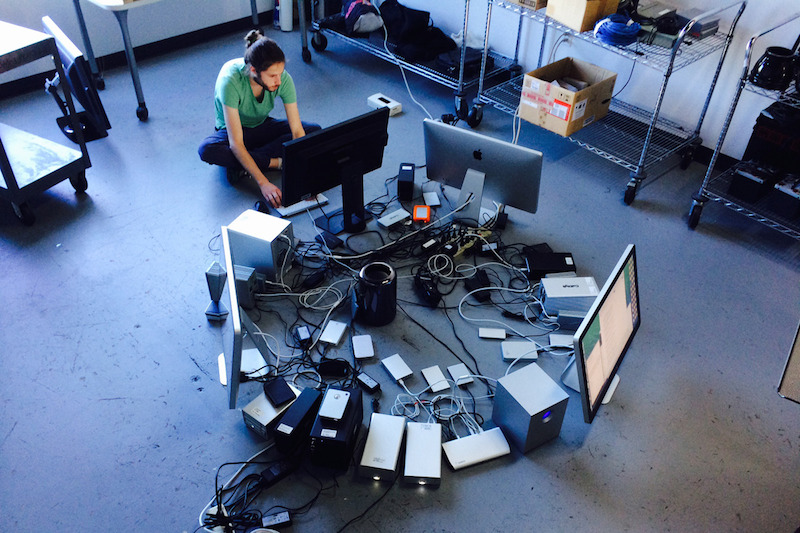 My idea of a home office workstation is a machine that fulfills many different roles, some of which the 2013 Mac Pro did. I also prefer it to be able to run games, even if it has to dual boot or run a Windows VM. I also want it to be able to support running multiple virtual environments to test things for work or for hobby projects. That requires a lot of resources and a lot of flexibility. The cheese-grater Mac Pro was the last example of that combination offered by Apple. The 2013 and presumably later Mac Pros have limited flexibility to external expansion which, generally, was the only flexibility laptops had. My Macbook Air can connect via Thunderbolt to a CalDigit docking station which gives it Ethernet, display, and USB 3 ports. This is great, especially since I move my laptop around a lot and don’t want to have a lot of cables to unplug when I grab it. For a workstation, this provides no benefits at all (unless you happen to need to run workstations office to office which, given how expensive these are, I totally understand).

Interior flexibility and customization is actually much more useful for a workstation because it not only extends its usefulness beyond its initial technological limits, but because it provides simplicity with the literal and figurative “black box” of components it contains. When I need to move things around my workstation, I can turn it off, unplug it, and then move it. I don’t have to worry about which power strips its peripherals are plugged into and which combination of chords I need to orchestrate for everything to work again.

I used the 2013 Mac Pro for awhile and, although I eventually sold it, it was a very impressive machine. It turns out though that, much like their software, Apple Hardware is going in a direction that doesn’t really fit my needs.